A heart-warming story for Christmas 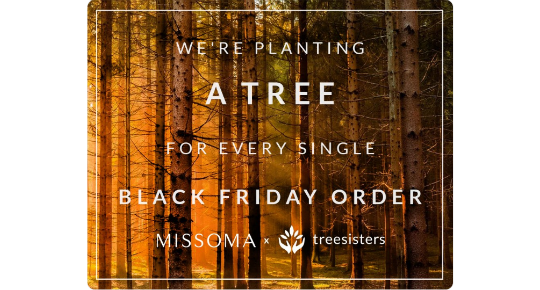 Ever wondered “What’s the point?” As individuals, we can feel like tiny little figures tossed on the waves of issues we don’t feel we have any control over. Don’t worry, this isn’t a blog about Brexit (life’s too short), it’s about the issues we care about, large or small, and not feeling there’s anything we can do about them, bar a feeble moan on social media.

Two of my red rag issues are pavement parking and excessive packaging and I’ve fired off plenty of anger-salving social media posts that have made me feel better and changed nothing.

Except one of them did. Last Christmas one of my colleagues received a package from Missoma, the jewellery brand. The lovely earrings it contained were small and beautifully formed, but the same couldn’t be said for the packaging they came in.

I took a picture of the outsized box and sent a tweet to Missoma questioning the excess cardboard, fully expecting the usual complete silence in response. Instead I got this tweet soon after posting: 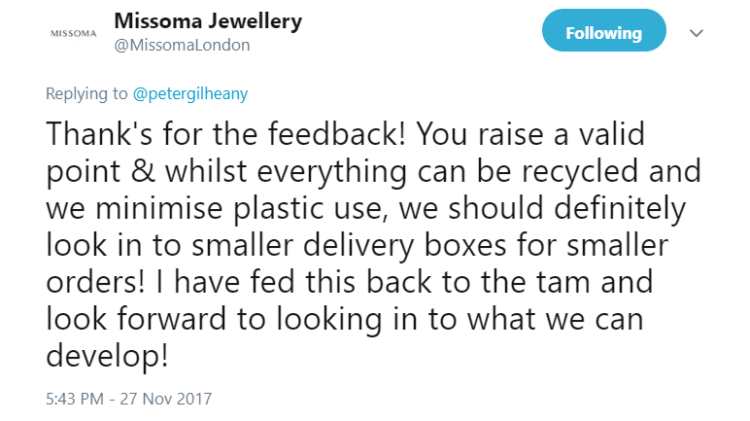 Exactly the type of lovely, unexpected response you dream of getting from a progressive brand – listening to feedback, acknowledging where they could do better and committing to doing something about it.

I thanked them for coming back to me, shared the tweet, encouraged people to buy their jewellery from them and promptly forgot about it completely. As someone much wiser than me once said, “promises are made of pie crust” and businesses often promise change and deliver nothing of the sort.

So, flash forward a year and, with the madness of Black Friday 2018 gathering pace, I received the following tweet:

So, here was a business in the middle of one of the busiest periods in the year, a crucial sales window, taking the time to come back to someone about the promise they’d made them a year earlier and outlining how they had followed through on it.

When it comes to social change, the path to progress is littered with aspirations, promises and commitments that come to nought.

It is so refreshing to see a brand succeeding in what we think is the biggest challenge – turning ambition for change into action.

There are two things you should do as a result of this heart-warming story – first, buy your jewellery from Missoma. Second, when you see something you don’t agree with, raise it and challenge those involved on it. Just occasionally, you’ll get heard and something good will happen.