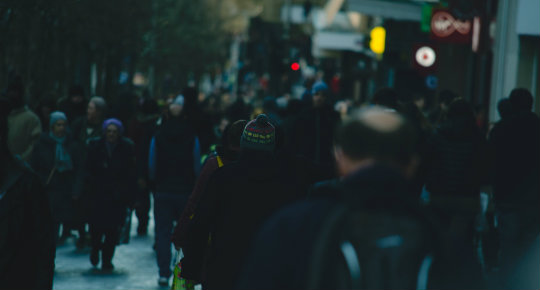 The term “hard to reach” is often used to describe a number of groups within society that are seen as difficult to engage with, those regarded as disillusioned with politics and democracy. Often this term is laid at the feet of youths, the illiterate, ethnic minorities, those who barely know or participate in democratic processes. The gap between those in authority and their “hard to reach” constituents has continued to widen over the years.

Despite most MPs and Councillors having a strong digital presence, some of them lack a physical presence within their communities. It’s not unusual for constituents to not know the name of their local MPs or Councillors, be aware of how to contact them, or even see them in person. These are candidates who are elected to represent the community yet some people wouldn’t recognise them walking down a busy road. Living in a low socio-economic area, I have experienced this first hand, family members and friends, of all ages, who are unable to name their local representatives. This isn’t an issue that affects just the youth, but all generations. Often it’s the community that get the blame, “they should know who their representatives are, they voted for them”, but the blame lays on both sides.

MPs no longer seem to be at the forefront of their communities, as they might have been in the past. With the rise of social media over the last few years, it is very easy to find an MP on at least one social media platform, but how much of this communication is actually getting through? How many constituents actually follow their MP/councillors on sites such as Facebook and Twitter? While this form of communication can be great for millennials, as they get to see their MP in a more personal light, it neglects those who are not social media savvy. Should those who do not have access to the internet, let alone a computer or laptop, miss out on knowing their MP on a personal level?

We are all familiar with the bombardment of candidate calls, leaflets, newspapers, frequent appearances telling us why they are the best candidate to represent our needs. For some, this is the only information they get about their MP/Councillor and after the results this communication stops and constituents often don’t get to hear about the work of that MP afterwards. It is not good enough to only be aware of your MP during election times, if this continues, the relationship between an MP/Councillor will worsen and possibly become hostile. A lack of trust and support can eventually build up, leading the community to reject those in authority and take matters into their own hands when issues arise.

The line of communication between those in authority and their communities needs to improve. This can be done by representatives being more visible in the community. Attending local events and meetings, being out in public, providing more information on where and how to contact them. These are a few ways which can improve the gap between authority and community. Representatives need to be more accessible in order to build and maintain a functioning relationship with the community.

In order to bridge the gap, those in authority need to be able to connect with the constituents they represent. Rather than alienating the ‘hard to reach’, they should make more effort to involve them, to build their trust and hopefully strengthen the relationship within the community, for years to come.