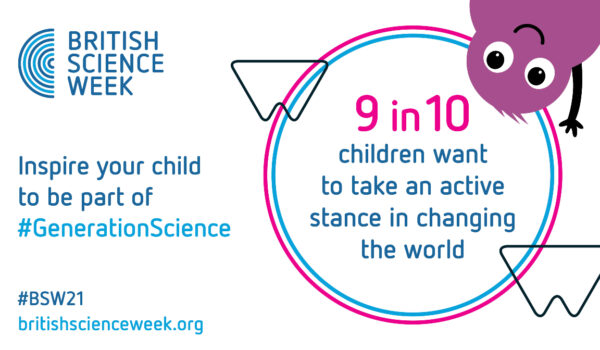 Today is the launch of British Science Week. It’s an opportunity for us all to help create, support and motivate #GenerationScience – the next generation who will be a major part of creating solutions to some of our biggest issues, from medical emergencies to climate change.

We’re thrilled to be working with the British Science Association (BSA) for the launch; highlight the potential of science, how it is a part of everyday life and will provide valuable life skills.

New research carried out by BSA reveals that most children (almost 9 in 10) want to take an active stance in changing the world, but they lose faith in their ability to do so as they get older. After such an important year for science from vaccine development, to Mars exploration and tackling climate change, now is the time to help motivate children to follow their dreams.

This year’s British Science Week will focus on showing Generation Science that it is possible for them to act on their desire to change the world. With free-to-use activity packs for parents and teachers as well as events from partners such as Universities, museums and even zoos taking place throughout the week, it will show how important, interesting and accessible science is, and how it plays a huge role in everyone’s day-to-day lives.

“This research shows the impact that becoming a teenager is having on our nation’s children when it comes to their confidence in chasing their dreams. Despite being galvanised by the issues we are tackling as a society, many simply stop feeling able to make a real difference as they get closer to beginning their careers.

“As school closures begin to end and children begin to get a semblance of normality back in their lives, it’s really important we continue to motivate them to pursue their dreams. It’s important that both teachers and parents capitalise on new scientific visibility and in some cases their newfound knowledge, by talking to their children about the many ways in which science affects our day to day lives, making it informative, exciting and fun, so that they stay motivated, and encouraging them to start thinking, even at an early stage, what sort of role they could play in this brave new world as they go through their schooling.”

Parents, teachers and children can get involved in events taking place throughout the week, including:

Visit www.britishscienceweek.org to find out more information about all of the resources and events available.

Forster is committed to working with organisations taking action on the climate emergency. If you would like to talk about scaling your impact through effective communications please get in touch with the team on 020 7403 2230 or email