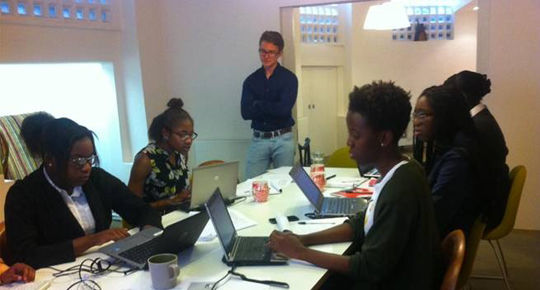 Diversity in PR is a well publicised issue in the industry, and with no quick fix it can often be difficult to see when and where the change is happening.

I’m not so diverse from the average PR practitioner myself, although some of my city dwelling colleagues may joke that being from Essex is ‘pretty out there’. While not as alien a county as certain TV programmes may have you believe, it’s actually not too far from the truth. I had never heard of PR growing up in my town, and I hadn’t even heard of it when I applied for my PR apprenticeship (bold move, I know) – I assumed it was just a synonym for marketing which is what I thought I’d wanted to do.

I originally blamed my naivety and gradually learnt about the industry during my time as an apprentice, but upon reflection I don’t know where I would have heard about PR. I didn’t learn about it at school, I didn’t know anyone in PR growing up, and in my local town I still don’t know anyone in the industry. So my main question is, where’s the PR presence in the lives of young people?

For me, I would love to have been shown how my interests and subjects could have been reflected into a career. Alternatively I, amongst thousands of other young people, was ready to go through the education factory and stumble into a job. It was only when the university prices tripled that I took a step back to think about the career path I wanted to take. Career guidance counsellors recommended marketing, which led to PR – but that’s a different story, so I’ll bore you another time with that.

So where does the responsibility lie for increasing diversity? Really, it’s all of us in the field. Recently, at Forster Communications, we partnered with Better Bankside who run an annual intensive work experience programme aimed at improving the prospects of young people in Southwark.  I ran a workshop on Public Relations and the professional use of social media, which was one of several sessions designed to give them new skills and learn about a variety of careers. I’m not saying we changed their futures, albeit I thought the session went rather well, but it gets the word of PR out there amongst those who hadn’t even heard of it.

We can actively seek opportunities where young people are looking for jobs, or even for those who aren’t, but what’s important is that PR practitioners become a representative sample of the audiences we so desperately try to engage. If we want to grow, like anything, we have to put the time and investment in – we need to be in the faces of those thinking about their career paths.