Meenal Sachdev, Director of Shiva Foundation and Head of Sustainability of Shiva Hotels 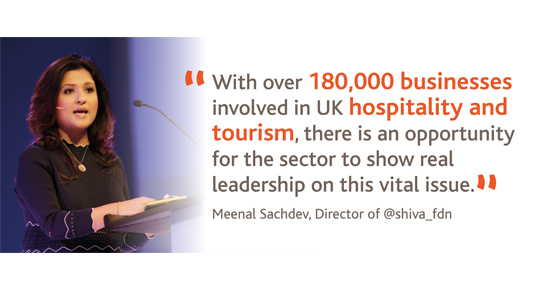 As a major business sector involving millions of people, the hotel industry faces the undeniable risks of modern slavery. Hotels can unknowingly be used to traffick victims of sexual abuse, and those looking for employment (often in lower skilled roles such as cleaners and maids) may be forced to work against their will or mistreated and paid little to no wages. The vast quantity of goods purchased by hotels can also present supply chain risks, such as the possibility of poor working conditions for those involved in fishing or cotton picking.

Despite these risks, modern slavery isn’t something that springs to mind when most people think of hotels. The scale of the problem is often undetected or underreported, which makes raising awareness of the issues all the more important.

Being inspired to take action

My efforts to fight modern slavery were sparked five years ago after stumbling upon the heinous crime of child sex trafficking globally. I learnt about stories such as Emily’s, a young girl who was offered her first job by the alleged owner of a local restaurant. Instead of being taken to work at the restaurant, she was led to a hotel where she was forced to have sex with 60 men over three days.

To help combat the problem, I formed Shiva Foundation with my husband, Rishi Sachdev, who is also Founder and Director of Shiva Hotels. Shiva Foundation aims to tackle and prevent human trafficking and modern slavery in the UK, and a large part of our work focuses on developing collaborations and practical working models for the UK business sector and local government.

As part of our commitment to working together to create lasting change, Shiva Foundation has formed an industry-wide network to combat modern slavery in UK hotels. The Stop Slavery Hotel Industry Network, which launched at the end of last year, brings together representatives from across the industry to address risks in their facilities, employment practices and supply chains. The founding members will now be developing and testing methods to be shared throughout the sector.

The nature of the risks to hotels means modern slavery can be difficult to detect, which makes knowledge sharing through the Stop Slavery Hotel Industry Network even more important. Indeed, multi-tier recruitment systems, combined with the layered structure of hotels, which often involves brands franchising their properties, can mean illegal practices are hard to identify. Furthermore, mistreated workers – who are often foreign born – may be unaware that their treatment is illegal. If they are aware, they may not report their situation for risk of deportation.

While there has been much good work across the hotel sector to date, there hasn’t yet been a unifying scheme to bring this together. By sharing expertise through this network, we can speed up the spread of best practice, helping ensure the safety and livelihoods of those who may be at risk.

The scheme is backed by the British Hospitality Association, which will support its expansion throughout the sector, as well as the International Tourism Partnership. With over 180,000 businesses involved in UK hospitality and tourism, there is a major chance for the sector to show real leadership on this vital issue.

Shiva Foundation has also developed a Blueprint for hotels to use to minimise the risk of modern slavery. It is currently being piloted at one of the key London properties managed by Shiva Hotels, where hotel staff are receiving practical guidance on how to spot and report concerns.

We have also taken the industry leading step of making Shiva Hotels’ anti-trafficking statement available on each of the 260 televisions in guests’ rooms at the hotel, to help raise consumer awareness and encourage vigilance. We will be launching the Blueprint later this year to help provide hotels with practical measures to address modern slavery.

Businesses have a vital role to play in tackling modern slavery, and must use their resources and expertise to show real industry leadership. Every individual has a role to play, and I want to call on the UK’s hotel sector to join us on this journey.

Collectively, we can create a vital movement to protect the lives of thousands of people.

Shiva Foundation is a corporate foundation that aims to tackle and prevent human trafficking and modern slavery in the UK. It facilitates collaborative and systemic approaches to change and creates and implements practical working models for the UK business sector. Shiva Foundation also focuses on educating local communities and partners with like-minded organisations to scale innovation in this area.