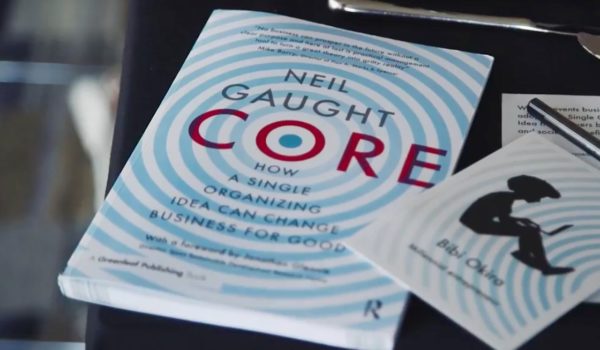 Accompanied by my friend and consulting associate, Dalia Farouki, the Middle Eastern leg of my book tour started with meeting the head of CSR at one of Lebanon’s best known banks and ended, via several other meetings, at the Suliman S. Olayan School of Business in the pristine grounds of the American University of Beirut (AUB).

The first thing to note is that ‘purpose’ is not a word in Beirut’s business lexicon just yet; but there are murmurs. Whereas in the West I spend much of my time fielding questions on the meaning of purpose and the ‘purpose of purpose’, in Beirut there was no need to hack through the ‘purpose thicket’ to get to the point. We got to the practicality and benefits of a Single Organizing Idea (SOI) straight away. Its role as a strategic management tool, wealth creator and catalyzer of businesses determined to change for good was immediately grasped. This is refreshing.

The second thing to note is that CSR is only practiced by a handful of Lebanese businesses. My discussions with the bank and others led me to understand quickly that CSR is neither standard practice nor seen as a necessary ‘licence to operate’ there. There’s no need for it to be.

Like elsewhere in the world’s emerging economies, while there’s a growing middle-class and increasingly vocal millennials who care about the actions of business, they remain a relatively small constituency. Add lacklustre government policy-making in this area and it’s not hard to understand why the CSR that’s being practiced is done for other reasons, among them:

CSR may well help positively position businesses among peers and underscore a progressive reputation (I’m not naive), but I believe it when I’m told that’s not what is driving it in Lebanon on the whole. This is an opportunity.

It’s an opportunity that I was keen to share with the convener of the AUB Core Debate, Dr Dima Jamali[2] and the guests that her fantastic team had invited to the event. Dima’s experience and enthusiasm for the subject ensured probing questions and a lively exchange. The whole point of the Core Debates is not to preach but to invite challenges and learn. What I saw and heard topped-up my glass-half-full optimism. Three things have stayed with me.

First, I was struck by the eagerness and immediacy with which people engaged with my explanation of SOI. There was no cynicism, nobody made comparisons to other concepts or wasted their own time dwelling on ‘why’. What they wanted to know, pure and simple, was ‘how’. How SOI works and what and where were the examples.

Second, I was thrilled by some people’s keenness to act quickly. One person enthused about the need to introduce SOI to economic development agencies with urgency. “Most businesses don’t have a strategy here at all” she said, “its day-to-day survival. We need to look carefully at what you’re suggesting.”

Third, I was by impressed by the comments of Samer Sfeir, a young man who introduced himself as a social entrepreneur and founder of ShareQ NGO and M Social Catering, both aiming to integrate socially, physically and financially challenged people into jobs so they can overcome their challenges, be productive and live in dignity. He explained how one of his enterprises, had attracted the attention of investors. But there was a catch. His would-be investors liked the business but not the social cause – it was a waste of time in Beirut, they said, and an unnecessary distraction from commercial success. He turned their money down. I was humbled when he said, “Listening to you and this discussion has confirmed I did the right thing, and has redoubled my ambition to build a great social enterprise in Beirut and attract impact investors on board of my enterprise.”

It’s been a privilege to have my view of the world shaped by many such exchanges. I continue to listen, learn and grow my understanding of what’s possible. Despite the enormous challenges I’m convinced SOI is a solution. But perhaps businesses in the developing world are better placed to realize it first?

[1] For my hosts’ view of these debates see Ipsos’ Meghann Jones article here.