As a Living Wage employer and long standing supporters of the Living Wage movement, Forster was watching coverage of this year’s 4th annual Living Wage Week with interest last week. Whilst there was some excellent broadcast and print media coverage for the week, we were particularly keen to see how it was being discussed online.

Despite the strong influencer rating of some of the key people who engaged with Living Wage Week on Twitter this year, including most of the major political parties, several high profile politicians and charitable organisations such as Oxfam and Friends of the Earth, the overall results were somewhat lacklustre: 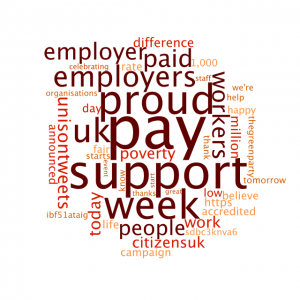 Our Head of Corporate Communications, Martin Barrow, recently weighed in on why businesses and charities must embrace and celebrate the higher living wage, not the minimum wage that has (until now) allowed many organisations to stay afloat, for Third Sector – read the article.

Our disappointing discovery of less online discussion than last year could indicate that businesses and/or charities are still not embracing the national living wage like we would have hoped. One thing for sure is that the next 12 months will speak volumes as to whether the living wage becomes the norm, or is resisted to the death.