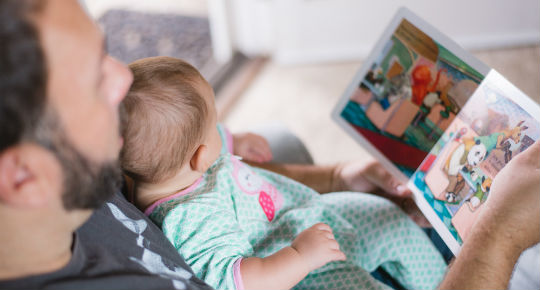 When I first announced I was pregnant to friends and family, one of the first questions many asked was ‘how long are you taking off work?’

Maybe this is because I’ve consistently and vocally made a virtue of enjoying my work. Maybe it’s because I’ve worked hard to achieve a relatively well-paid and responsible role, and they are wondering how I’ll feel about being away from it. Maybe, as many are parents themselves, the dilemma of balancing work and family is at the front of their minds.  Or maybe I just look knackered and they’re all hoping I’ll take some time off.

My husband was asked the same question, but I’m sure those who asked were expecting an answer measured in weeks rather than months. Shared Parental Leave regulations came into force in December 2014 but take-up remains pitifully low, estimated at between 2% and 8%.

In April this year, the charity Working Families published research claiming that the government’s shared parental leave policy was failing, in a large part because families could not afford for fathers to take the shared leave they are entitled to. They called on the Government to equalize pay for shared parental leave, but also acknowledged the crucial role employers play, saying “Employers going beyond the minimum pay for Shared Parental Leave would also make it a more realistic option for more families.”

The reality is that many families rely on state financial support when they become parents. But it’s also true that many mothers currently benefit from additional paid leave from their employer. For those employers who are able to offer this, what’s to stop them offering additional paid leave to fathers, or in the case of same sex couples, a non-birth mother, too?

This summer, we decided to take the step to extend paid leave to all employees at Forster who are new parents, not just mums.  And frankly, it just made sense. It wasn’t fair that some of our employees were entitled to extended paid leave when they become parents but others were not.  We’re now offering up to 20 weeks of paid leave to all parents, any time in the first year after their child is born. This means that not only are we supporting our employees financially, but also giving them the flexibility to take advantage of that benefit at a time that suits them. So if, for example, fathers want to take their 20 weeks 6 months in, they can.

We’re proud to be pioneering in this area, but it’s a shame we are still the exception. Most employers still only offer extended paid leave (if they offer it at all) to mothers. This means that in most families, the sensible – indeed necessary – financial decision is that there is no real choice about who takes leave and who goes to work.

Attitudes are stuck in a groove

In my own story, my answer to the leave question prompted interesting responses. When I said I planned to take 26 weeks, with my husband then taking over with a subsequent 12, there was concern all round. Concern for me sounded like this: ‘Well see how you feel, you might not want to come back then’, ‘Are you sure that’s long enough?’ etc. Concern for him was markedly different ‘Will your work be okay with that?’ ‘How do you feel about being a stay-at-home dad in a world dominated by mums?’

Fewer people than I hoped said ‘Well you enjoy work and earn more, and it’s important he gets a chance to bond and be primary carer, so that makes total sense’.

We still live in a society where child-rearing is primarily the responsibility of women. Men are expected are ‘fill in’ or ‘do their bit’ but not take the leading role. And in turn, women are expected to make sacrifices at work.  The language my friends used is a big giveaway. I’m seen to be ‘giving up’ some of ‘my’ leave. Whereas, despite being excited and positive about becoming a new dad, my husband is judged as ‘risking’ his reputation at work.

So what’s the solution?

Around the world, there are now many different approaches to this problem. In many Scandinavian and East European countries, shared paid leave is generous and government sponsored. In Sweden for example, mothers and fathers are entitled to 480 days (16 months) of paid parental leave to split between themselves as they choose. Whereas in the US there remains no legal right to paid leave for either parent. There is such variance at a global level, it seems there’s little consensus about the right solution.

For me, the key is to offer parents flexibility. Every family is different: what each partner earns, how they prioritise work with other areas of their lives, individual children’s needs, support networks…All kinds of factors play into what’s best for families when deciding how to look after their children and keep family finances as healthy as possible.

This is where employers can step in and really make a difference.

The old system of mum stays at home and dad goes to work is still the only practicable answer for many families while shared parental leave remains largely unpaid for fathers and non-birth mothers. With mums being forced to make career sacrifices, regardless of their earning power or desire to work, contributing to our continuing gender pay gap, and fathers missing out on essential bonding time with their children, surely it’s time for more employers to take the lead and help to address the balance.