Should you believe everything you read? 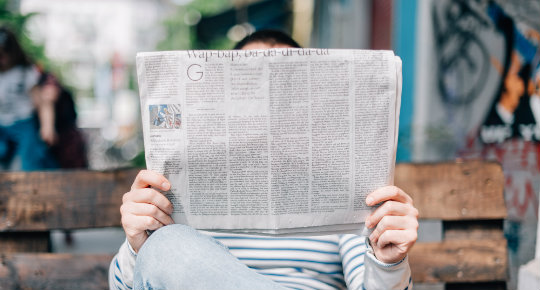 There is a timely quote from the film, “The Man Who Shot Liberty Valance.”

“When the legend becomes fact, print the legend.”

The film was made in 1962 and set much further back in the American Wild West, which shows that fake news and sensationalism aren’t new concepts. However, both have probably never been as prevalent as they are now.

The Office of National Statistics (ONS) recently announced that it has been vastly overestimating the number of international students overstaying their visa, figures which had been previously been widely reported on by the UK media . The coverage of the revised figures has been considerably less than the now discredited previous figures; they have become a legend.

These misinterpretations and misrepresentations of statistics have real life effects. The most high profile of these “legends” is the infamous claim that £350 million a week would go to the NHS not the EU if we voted to leave the European Union. These figures were extensively disproved at the time, however in the run up to the referendum, market research organisation IPSOS MORI found that only 39% of people believed the figure to be inaccurate. Yet Boris Johnson felt emboldened enough to cite it again last week.

Where does the responsibility of fact checking our media lie, for challenging the con? Surely whoever provides the information is obliged to ensure its validity? Well… not exactly. In 2016, Associated Newspapers (the group that owns the Daily Mail, Mail on Sunday, Scottish Mail & Metro) resolved 309 complaints across their titles – with 259 of those complaints relating directly to accuracy.

So what can progressive organisations do to curb the spreading of misinformation, particularly in relation to the issue they want to engage on? For a start, they can encourage all audiences to read the full article and analyse the statistics. Are they gross instead of net? How does that affect the article? Was the data gathered in a biased way? Has the writer acknowledge this bias whilst forming conclusions? Are we reading comment, conjecture or fact? Really importantly, they can encourage audiences to look at the same story through multiple outlets. The Guardian and the Telegraph will often write about the same issue from completely different perspectives and use any data and facts in diametrically opposite ways.

Most importantly, however, they can use their own channels to rebut inaccuracies, challenge myths and give a platform to alternative views and perspectives. One of the reasons why more media outlets are increasingly falling foul of inaccurate reporting, fake news or sensationalism is their resources are being stretched. They need to chase ad revenues through click baiting and are competing with many other organisations who now have the means, thanks mainly to social media, to reach out to huge audiences directly themselves.

There is a temptation to follow their lead and use fake news, dodgy stats and sensationalism to further social good, but the ends do not justify the means. For a progressive organisation, how is just as important as why – don’t believe everything you read, but don’t give any audiences reason to doubt the veracity of your own communications.

A Decade of Immigration in the British Press