Study reveals issues that mattered most in 2015

Homelessness, feminism and mental health establish themselves in national psyche

As the year comes to a close and attention turns to the year that was, Forster, the communications agency working with businesses and charities to accelerate change, today reveals the social issues that most captured the nation’s attention over the last 12 months. 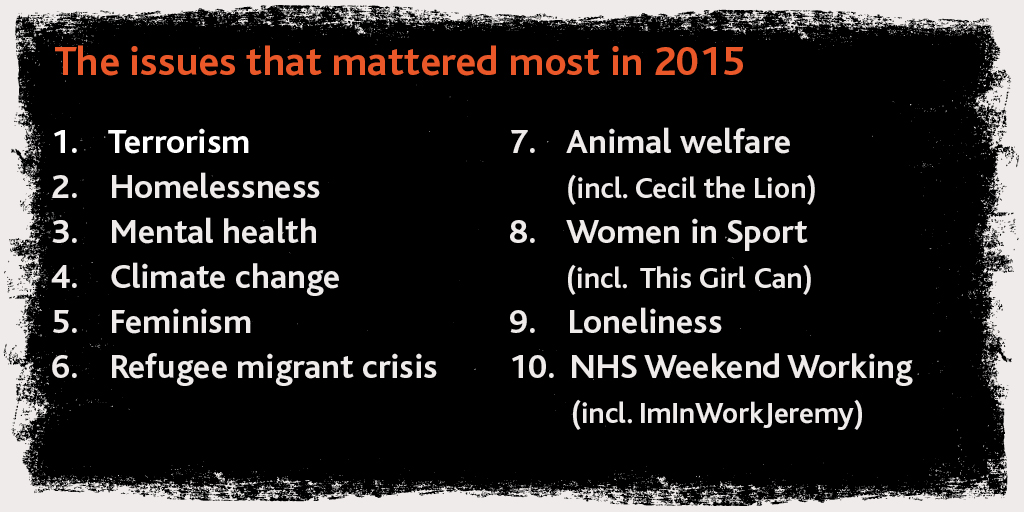 Social media and national newspaper content has been analysed to understand frequency of mention, with some surprising results. Whilst Cecil the lion, refugees and being ‘beach body ready’ are in the top 15, they have been pipped to the top spots by homelessness, mental health and climate change. Perhaps unsurprisingly terrorism heads the rankings.

Feminism, homelessness, mental health and climate change being in the top five shows how important these topics have become in the national psyche. They are no longer just the territory of campaigns and rabble rousing but more established constants that as a nation we are demanding debate around.

There is a growing trend for issues capturing attention in twitter first, leading to mainstreaming and amplifying in national news. Good examples of this are with #IminWorkJeremy, #BeachBodyReady and #DistractinglySexy campaigns.

“The relevance to a person, be it a political leaning, or an issue that relates to their lifestyle is the ‘active ingredient’ that sparks the first engagement. For momentum to snowball audiences need to feel a community building, trusted voices to support, action to be easy and a reward to be available.

He continues: “This is what we have seen with Tyson Fury – his comments on homosexuality and women are abhorrent to many. The reward being sought is the removal from the BBC Sports Personality of the Year shortlist. The more the momentum builds, the more realistic the goal seems and the issue ignites beyond the first social media petition.”

The data suggests the influence of brands is not to be underestimated. Whilst awareness does not necessarily translate to action, loneliness has earned its space in the top 15 in part due to the John Lewis advert and its partnership with Age UK. As thoughts turn to 2016, this is reason for partnership managers to consider charity corporate partnerships not just as funding opportunities, but more as powerful partners for driving change.