Why we shouldn’t be ashamed of failure 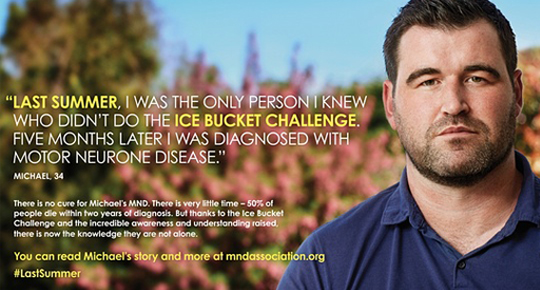 MND’s Last Summer campaign launched earlier this year caused great controversy amongst the public and voluntary sector. An awareness campaign aimed at regaining ownership of the hugely successful ice bucket challenge instead was perceived as a guilt trip for not taking part. The charity had clearly made a mistake. We watched with real interest because we had pitched for the campaign and been unsuccessful.

This week, almost two months after the campaign’s launch, I was surprised to see this comment piece on Guardian Voluntary Network from creative agency, Neo.

A rarity within the media industry, rather than celebrating the success of a campaign, the commentary explores the failure of the MND Last Summer Campaign, and most importantly how the agency has learnt from it.

Not only is it refreshing to see an agency put its neck on the line and admit their mistakes, but it is a great learning for us in the communications industry too. They say you learn more from your mistakes than you do your successes. Why then is the marketing and PR media filled with glowing success stories? Why is an article like this such a surprise?

Yes, as agencies we use these platforms as a new business opportunity, but surely it shows more to prospective clients that you’re willing to learn and improve from your failures, and share that learning with others, rather than shouting about what went well and why?

Forster’s evaluation model is based around the theories of behaviour change, measuring reach, engagement and action. We adapt it for every client we work with and use it, not only as a KPI mechanism, but as a learning tool for evaluating the campaign. If one measure hasn’t succeeded the way we planned, it will be very obvious to the client, we can’t avoid talking about it. But rather than trying to explain it away with excuses we use it as a learning exercise, how can we do better next time and how can we adapt our strategy and approach to hit this target. Surely that’s why we do post campaign evaluations?

I for one would like to see more articles like Neo’s. As a profession eager to improve, the communications industry shouldn’t be ashamed of our failures but be proud of how we’ve learnt from them. Let’s start taking failure seriously.